The Heraion of Perachora was a sanctuary dedicated to the goddess Hera, situated in a small cove of the Corinthian gulf at the end of the Perachora peninsula. In addition to a temple of Hera which is of unusual construction, the remains of a number of other structures have also been found, including a L-shaped colonnade, a large cistern, dining rooms, and a second potential temple remnants. The Heraion Archaeological Site is visited by thousands of culture and history lovers throughout the world every year since the unusual plan of the 6th century BCE temple of Hera Akraia combined with the idyllic location and the the remains of a 9th BCE  structure are of interest to the study of the development of the Greek temple as an architectural and cultural form.

The Melagavi lighthouse, also known as Heraion lighthouse, was built in 1897 on the Agrilaos peninsula next to the Heraion Archaeological site in the gulf of Alkyonides Islands.  Melagavi is renowned to be one of the 10 most beautiful lighthouses in Greece and it is also one of the most photographed landmarks by travelers with thousands of captures on Social Media. 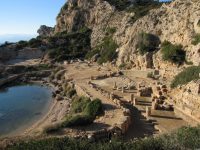